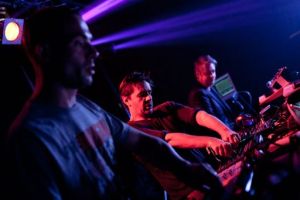 Of all the forms of dance music, techno is probably the most misunderstood. It’s the difficult middle brother of universally accepted house music; its immaculate basslines are the obsessive compulsive aunt to the wild energy of drum’n’bass; and for non-fans of electronic music, techno is the blanket term for all of it.

He’s the techno DJ that plays techno about half the time – and if you check out his albums, you’d assume he’s not a techno producer at all.

Catch him live, and you’ll, well, actually catch him live, thanks to latest project, LBS, or Live Booth Sessions, which he performs with fellow producers Benjamin Rippert and Stephane “Scan X” Dri, and the odd live musician. Dri and Rippert operate several effects machines which run through three computers, while Garnier is conductor with a remote control that replicates an entire 24-track DJ mixer, only as a small box with a bewildering number of knobs and switches. “LBS has grown out of me DJ-ing live with a band for 18 months,” he says. “Scan X on machines with me means I basically no longer have too many things to do, and allowed me to look up, direct and construct on stage. Things like a new trumpet player coming in allowed me to really change my view on constructing a live show – it’s so organic and exciting. Coming back to the ‘wheels of steel’, where you play music that you can’t alter, made me feel like I was regressing more than progressing.”

LBS is a five hour set with each track averaging about 20 minutes; 35 minutes isn’t unusual either. Records are sampled and mixed with live renditions of Garnier’s own tracks played by all three members, for a show that’s different every night. Like Garnier’s own albums, LBS isn’t the purist’s definition of techno – but then again, that’s exactly what Garnier shies away from. Instead, it warms the form with jazz, funk, and hip-hop for a lush, organic sound that successfully jams members of the brass family with their electronic cousins.

Take 2005’s Cloud Making Machine, an introspective, cinematic soundscape that is a dark contrast to his most recent album, Tales of a Kleptomaniac, a funk-infused piece that stops off at dubstep, drum’n’bass, and ambient electronica before heading back to the jazzy techno Garnier is known for.

Where he was more regimented in playing harder acid techno, Garnier reached a turning point as a DJ when he wrote his autobiographical book, Electrochoc. “Every week for two and a half years, the journalist I worked with to write it would come to my house and ask me millions of questions,” he says. “It became a therapy – why, where, how. I started to ask myself very deep questions, and that was when I felt OK, I know where I stand. I thought, you know what, if I feel like playing a disco record, I should just do it and not be scared of the crowd. Because of all this talking and thinking, when I started my next tour I played funk, soul, reggae, punk, hip-hop – everything but techno.”

“That’s when Djing changed a bit, got more colourful. Eight years later, I’m so happy I did it.’ Garnier speaks confidently and quickly with a French accent that’s survived his years in England, DJ-ing in Manchester’s burgeoning house scene. At 14, he was already obsessed with music and clubs, and four years later, moved from hometown Paris to London. When he chanced upon Manchester’s infamous Hacienda club, he started playing there and was instrumental in the ‘Madchester’ movement where such iconic bands like the Stone Roses and Happy Mondays mixed psychedelic rock with the Chicago house and Detroit techno that was seeping into Britain.

“It was very different. You’ve got to understand – 20 years ago, we discovered a new kind of music. The kids were a part of it. House and techno belonged to us. It was not our parents’ music,” says Garnier. “Today, we’re still listening to the same form of music – but it’s been there since 1987. A 20 year old today grew up with it; it’s not him who invented it. It’s not part of his youth, but his life.”

You can hear the thoughts tumbling into place as he deftly articulates his responses, which reach an impassioned peak when he talks about dance music and its surrounding culture. “People want to keep techno underground – it’s pathetic,” he says. “In any style of music, when it starts it’s very open, but after 10 years, people say we know it all. Look at the beginning of jazz, so free. Now people say that when Miles Davis died, it never moved on – that’s absolutely not true.”

“Techno is all about freedom to make music the way you want. I’ve heard it said a million times that techno kids are not musicians because they use computers. We were fighting against that,” he says. “And now we cannot use the same speech [to define techno]. For dance music to grow, we need to get out of our boundaries and start preaching to other crowds.”

Towards his own productions, he has a similar fire, and every bedroom DJ with a demo to push knows the Laurent Garnier story where he listens to every single track he gets sent. “I’m sent 1,500 tracks a week, plus stuff I get myself. I spend my whole life on music. I insist because finding the right record is the essence of my job,” he says matter of factly.

“Yesterday I worked from 9am to 1am and today at 8.30am, I’m already awake and speaking to you. After this, I’m doing a radio show.” “I’m somebody who’s very much a part of the scene, and still now, after 20 years, I get the crowd and drive them crazy,” he says. “I’ve never felt I’ve made it. It’s good, because it gives me the rage. And that makes me give more.”

Despite the time he spends on music, Garnier’s personal life is one of his proudest achievements, spun out these years in a small village in the South of France. “I’m close with my brother, but I don’t come from a family that is very strong at all. It’s bullshit,” he says. “I’m living with a wonderful person and we have a wonderful boy, and I’m very happy I haven’t recreated the frustration in my own family.”

“I’m proud to have gotten where I am having stayed honest. I’ve never compromised. I must have played cheesy records, but I liked them at the time,” he says. “Take ‘Ride on Time, by Black Box. Back in the big acid house days in Manchester, it meant something. Everyone was taking ecstasy and it was one of the happiest songs around. At the end of the night you’d play this and it was like an explosion. But if I played a classic set today, I wouldn’t pick it, and if it came out right now I’d think, ugh, it’s far too commerical.”

In fact, he’s already branched out from the dance music scene to a whole other style of music – contemporary dance, for which he has written three pieces for choreography. “I hope in three years I’ll be finding or writing music for cinema. I can’t picture myself being a DJ when I’m 50. I’m 45 now and it’s already feeling strange sometimes. I’m going to have to think of a way out.” “I did exactly what I’ve always dreamed of doing, one dream after the other – DJ-ing, then DJ-ing in a big club, getting the crowd, becoming somebody in the DJ world, producing music, making an album, opening a record shop, and hey, how about having a record label maybe,” he says. “But for sure, I’m not on top of my art. I’m far from saying everything I want to say.”

If house music is the gateway drug, techno is the last frontier; the final form of electronic music generally accepted by mainstream fans, save perhaps dubstep, the organ-shaking, bass-driven sonic implosion that is Garnier’s latest muse. “Dubstep is one of the most inspiring styles of music for me at the moment. I always said, our goal is to make techno music grow,” he says.

“LBS brings the music to a different audience and I’ve gained a lot of people who were very skeptical about techno,” Garnier says. “Because when it’s a special night, it’s a super special night.”